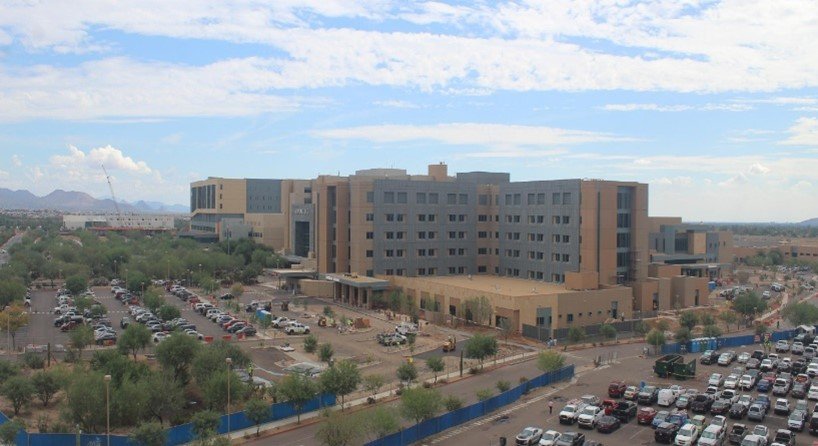 Included in this project description, we will explore the following major design, make ready, construction, and post backfill project packages that all came together as a whole to create the final finished product that is the Arizona Forward Mayo Clinic West Expansion project;

For 18 month’s WDM owners, project managers, superintendents, and VDC team working together with Mayo, HKS Architects, WSP Engineering, and all the other trade partners in the 3D BIM/VDC Revit model to assist in producing an optimized set of design documents to allow for construction of a highly desirable building expansion for Mayo Clinic. 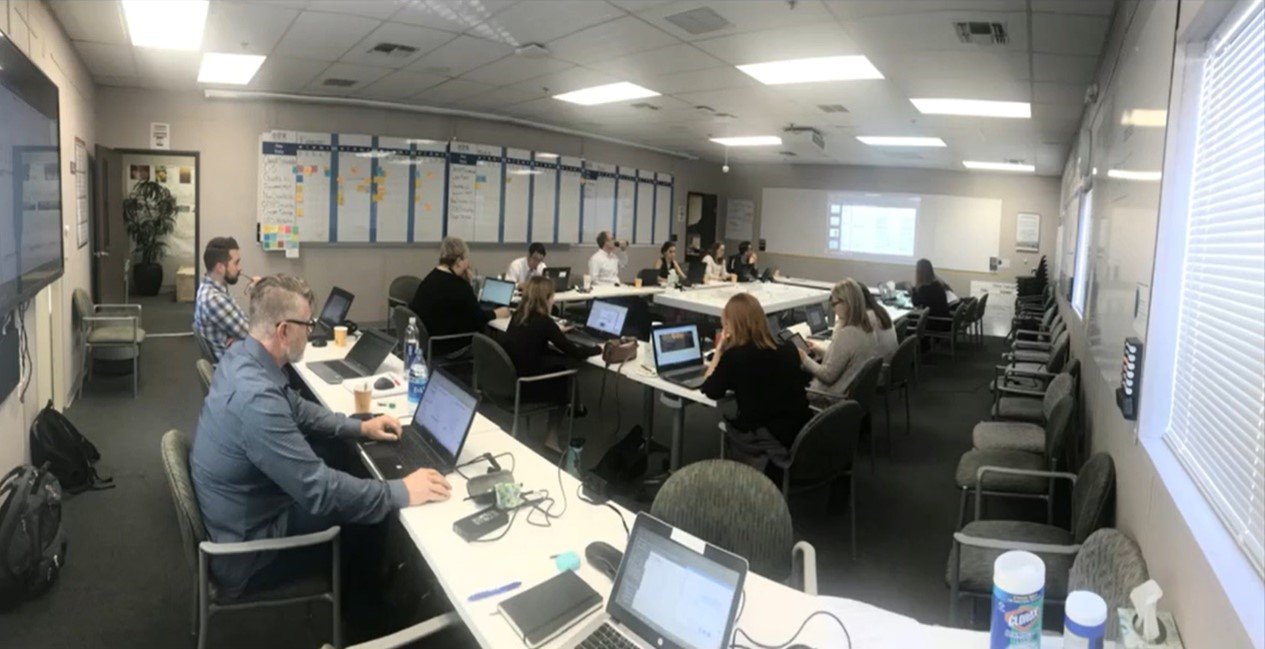 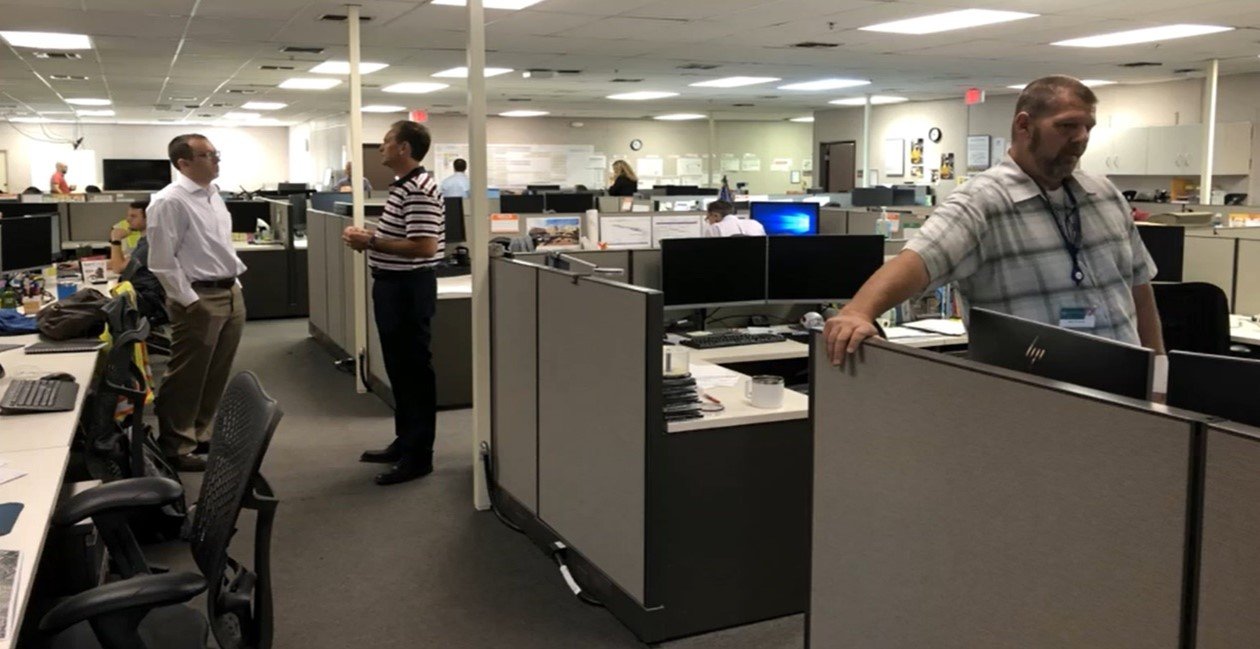 During the eighteen-month process of developing these construction documents the design team worked together in the “big room” an open office large modular trailer including multiple workstations, open and closed meeting areas, and break area to allow for the entire team the ability to quickly ask questions of other team members and get real time answers.  The IPD design process for the project allowed for significant improvements in construction pre-fabrication optimization, and trade coordination efforts allowing for reduction in overall construction schedule for the project.  There was a significant reduction in costly requests for information (RFI’s) and change orders directly due to the IPD efforts put forth by the team well before boots hit the ground.

The make ready one construction package consisted of all the site civil and roadway preparation work required to allow for construction of the new 642,000 sq ft west expansion building.  Mayo’s emergency department drive/entrance, ambulance drive/helipad, and main West side staff entrance were all directly on the soon to be built West Expansion footprint, so all the access to these critical hospital departments and the helipad itself needed to be changed before construction could start. 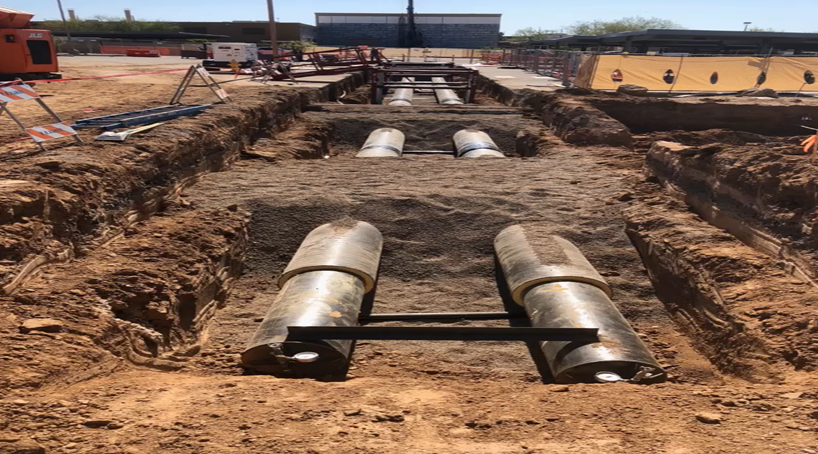 The make ready two construction package consisted of multiple smaller projects to further prepare for building the new West Expansion.  One of these main sub projects included building new prefabricated life safety rated horizontal exit/entry corridors from the existing emergency department entrance to North of the new building footprint, and another corridor from the existing ambulance entrance South to just past the new building footprint.  Another major sub project was extending carbon steel 20” chilled water supply and return piping from the existing central plant underground in a joint trench with 4” medical gas, and electrical duct banks 300’ to the concourse level of the new West Expansion.   Finally, another main project was preparation for the CC level tunnel.  The existing 8” underground sanitary sewer pipe was at a depth that put the bottom of its pipe within 6” of the top of the tunnel excavation.  In order to limit the risk of this 15-year-old main sewer piping either breaking from disturbance of the fill below, or directly impacted from the tunnel machine during excavation we supported the piping with hangers supported from the level 1 slab on grade, and concrete red die slurry encapsulated the piping as a further indicator to the excavation operator that he was getting to close to this line.

An egg-shaped concrete tunnel from the existing concourse level of Mayo extended over 200’ West to connect to the concourse level of the new West Expansion.  Significant coordination efforts and underground utility locating efforts were completed before the final location and design of the tunnel was determined. 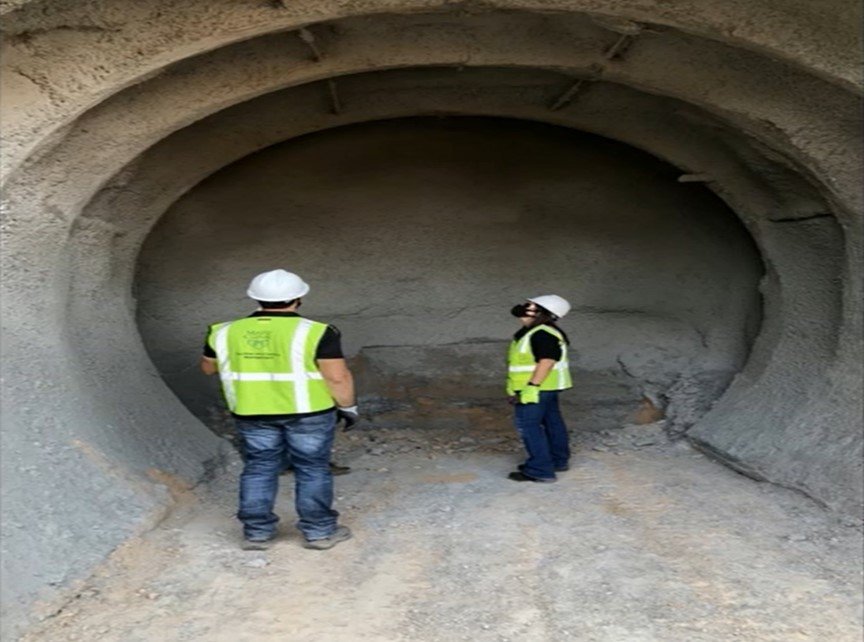 Working closely with Mayo the team was able to construction this tunnel with minimal impacts to everyday hospital operations that simply cannot stop.  One of the major successes was the team being able to ensure that the existing sanitary sewer mains, and electrical conduit banks directly above the tunnel, and under the hospital would not be compromised while under construction.

Fourth floor consisting of 60K sq ft shell area in the tower with system design allowing future build as a progressive or critical care units, and a mechanical penthouse for the South podium building.

Sixth floor consisting of 53K sq ft of mainly MEP mechanical area, and a small on call area in the north wing

The West tower construction is designed for vertical expansion of another three floors of progressive or critical care space.  The tower was completed in a record time for Mayo starting with foundations and underground in July of 2020 and turning the keys over to Mayo 30 months later in January of 2023.  It was impressive that all of this construction was completed with minimal schedule impacts despite the project being directly affected by material, equipment, and labor shortages directly affected by the pandemic.

The Mayo West Expansion Chunk 4 post TI backfill construction projects started in January of 2023 right after the completion of the West Tower construction, and carried on until January of 2024.  The  existing emergency department, laboratory, and portions of the radiology departments were moved into the new West Expansion building, creating the need for these multiple projects to demolish and TI built back those existing spaces for their new functions.  These post TI backfill projects scope descriptions are as  follows;

*Radiology consisted of a complete renovation 20k sq ft of existing radiology area in the hospital for repurposing to become new 7T MRI, 3T MRI, 3 CTs, X-Rays, prep/recovery, and support spaces.  The 7T MRI is the first of its kind in Arizona, and will be a huge asset in allowing Mayo to continue to advance in its integrated clinical practice, education and research.

*RWPP(Retail, Waiting, Phlebotomy, and Pain) consisted of a 37K sq ft complete demolition and repurposing of the existing lab to become a pain, rehab, retail, phlebotomy, and waiting space.  Included in this scope was a reconfiguration from the existing 100% outside air and exhaust 40,000CFM lab air handling unit to a traditional supply, return, with economizer unit.

*3CE remodel consisted of a complete TI renovation of 5,500 SF of Mayo’s existing east wing of their tower.  Significant coordination with Mayo staff and facility operations was required in order to change the sanitary waste and vent and storm systems from their original locations to the new layouts for the floors with 4 floors of operating hospital tower patient rooms above.

*Center For The Spirit remodel consisted of 1500 SF area for worship and meditation for Mayo staff and patients.  Challenges of building this space included careful VDC coordination between framing and drywall teams, and MEP for the curved hard lid ceiling spaces.