44 MONROE is a residential high-rise building, located at the northeast corner of Monroe Street and First Avenue in Downtown Phoenix, Arizona. The 34-story tower is Arizona’s tallest residential structure, and Phoenix’s fourth-tallest building.  44 MONROE is at the epicenter of the vibe in downtown Phoenix. Amenities of the property include 34 floors, 7 floors of above ground secured parking, 196 residential units ranging in size from 780 to 4,800 SF, state-of-the-art fitness center, business center and swimming pool/spa on the eighth floor featuring an outdoor terrace and sun deck.  44 Monroe brings a significant contribution to the revitalization of Downtown Phoenix. 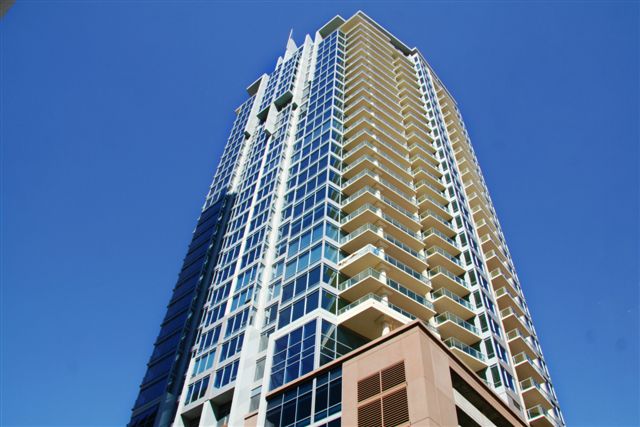 In late September 2005 the project began with the demolition of the long vacant Arizona Bank Building with construction beginning on the tower in November of 2005.  Once the 7 levels of garage space were complete the 8th through 34th floors were formed and poured at roughly one floor per week.  With numerous sanitary waste and vent, storm drain, domestic water and natural gas riser locations throughout each floor, BIM played a vital role in precise layout of all plumbing sleeve inserts. W.D. Manor took the lead on the project BIM efforts to fully coordinate the project, hosting weekly trade meetings at our BIM facility prior to installation, avoiding costly changes in the field due to trade conflicts.

The plumbing system at 44 Monroe included a roof drain system consisting of large diameter cast iron piping with risers to the 8th floor public deck and the roof level, a domestic water system fed from the street level to a 50hp booster pump capable of a total system flow with redundancy of over 1000 gpm and a system pressure of 225psi, domestic roof mounted hot water boilers obtaining an output temperature of 140 degrees utilizing three 485 gallon storage tanks located in parallel with high/low flow mixing valves for fluctuation of occupancy.. The cold water is distributed vertically supplying four zones as it rises to feed the rooftop equipment, while the hot water is delivered down the building branching off at four separate zones. Each branch off the domestic hot and cold water mains serving the floors are equipped with pressure reducing valves to lower the pressure in the system to 75psi.  A hot water recirculation pump and 40 gallon hot water heater maintain constant hot water recirculation throughout the floors for on demand hot water. In total there are 37,470 ft of cast iron piping (over 7 miles), 425 water closets and 634 lavatories installed throughout the building.